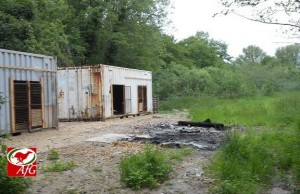 Depicted in these photos are where professional greyhound trainer Ian Brown , attached to Yarmouth stadium, was until recently happy to house his greyhounds ‘ bitches in season ‘ ‘ resting’ ‘ retired ‘ and ‘ racing ‘ greyhounds. With no light and no heating, over the coldest wettest months of the year. It is claimed that the dogs had no access to fresh, clean drinking water at all times, due to their bowls of water being often ‘ frozen over’. Has this man been banned from racing? has he been banned from keeping dogs?….No he is still a professional greyhound trainer racing at Yarmouth. We are unaware of the condition or the whereabouts of his greyhounds who were obviously kept in such terrible conditions at this unattended site at Decoy Road, Ormesby, Norfolk

The disciplinary hearing can be seen here
6. Professional Trainer Mr I Brown
Professional Trainer Ian Brown was found in breach of rules 2, 6, 152 (i)& (ii), 174 (iv) & (v), 212 and
213 of the GBGB Rules of Racing in relation to his failure to notify the GBGB of a change of address
and therefore subsequent running of his greyhounds from unlicensed premises.
Mr Brown was in attendance with owner Mr Cockell. Marcus Westgate, racing manager of
Yarmouth Stadium, and Adrian Smith, area stipendiary steward, were also present.
The Disciplinary committee heard that Mr Brown trained his dogs in kennels on tenanted land and
had been subject to notice from his landlord who had then proceeded to aggressively demolish Mr
Brown’s kennels piecemeal even as he took the dogs out for exercise. Instead of bringing the matter
to the notice of Mr Adrian Smith or the management of Yarmouth Stadium Mr Brown had started to
relocate his dogs to new kennels (made with 20ft containers) some ½ mile away which he had
intended to seek GBGB approval of when he had completed fitting them out. In the meanwhile he
continued during January 2013 to run 18 different dogs at Yarmouth which Mr Brown was adamant
were accommodated (all but 1) in the remnants of his approved GBGB kennels, suggesting that his
“resters” were kennelled in the unapproved block. The Committee doubted that only a single dog
had been run from an unlicensed kennel and noted that Mr Brown’s “container” kennels were never
going to be to an appropriate standard for GBGB approval. Accordingly the Director of Regulation
had suspended Mr Brown’s licence with effect from 30 January 2013.
While the Disciplinary Committee took a serious view of trainers running dogs from unlicensed
kennels they were cognisant of Mr Brown’s personal problems at the time which had caused him to
make a significant error of judgement. They also took particular note of the continuing support that
Mr Brown was receiving from the management of Yarmouth Stadium to enable him to construct
alternative kennels which would be acceptable to the GBGB. Without these mitigating factors the
Disciplinary Committee would have considered disqualifying Mr Brown.
Having considered Mr Brown’s explanation together with the circumstances of the case, the
Disciplinary Committee ordered that:-
1) Suspension of his licence continue until new kennels are approved by the GBGB
2) A further condition is that all Mr Brown’s retired greyhounds, resters and bitches in season
are removed from their present location into kennels to be approved by the GBGB by 30th
April 2013
3) He be fined £750
4) He be severely reprimanded