Published December 25, 2012 | By Keely
Dogs Name: Benson
Estimated age: 1 year old
Breed:  Rottweiler
Date came to AfGs care: December 2012
How dog was acquired: Previous owner no longer able to care for him.
Date Homed: 17.12.2012
BENSON
Was originly acquired as a pup by a lady in a London flat.
The property had a ‘no dogs policy’ and once the landlord found out about the dog he ordered the ‘owner’ to get rid of the dog or be evicted from the property.
Benson was then passed to another family member who had a female Rottweiler a new baby and a toddler!!!
Needless to say this option did not work out, so he was then passed to another family member. Now his accommodation was a shed in the garden. The family had a policy that dogs were not to live in the home!!.
There were children in the home so he was well socialised with children and other dogs when out on walks.
He was very overweight when he came to us as he had been fed a concoction of cakes, biscuits etc by the children!! He also had developed a very sensitive digestive system.
By a strange twist of fate an AfG supporter, David, from Norwich happened to be working on the owners factory and home as an electronic engineer and whilst in the house, Benson came bounding in to see him.
The ‘owners’ explained how they acquired Benson and why they could not keep him. They had recently had a German Shepherd dog stolen from the shed and as the days were now short of daylight hours they feared the same may happen to Benson. So there and then once David had finished his work he returned to Norwich with Benson.
AfG were able to place Benson straight into a foster home who were very knowledgeable with the breed. He first went to our vet to be weighed and have a check up and an annual booster which was due.
He had to have a choke chain cut off from his neck as it was too tight to remove over his head!! (the collar had obviously been put on him when he was younger and since he had grown it could not be removed).
It did not take long for his foster carer to decide to adopt him. He was later joined for a short time by foster Lurcher  Archie, until he found his forever home (see: https://www.actionforgreyhounds.co.uk/archie/ ), then later by Staffy/Whippet Cross Meg  who was adopted from AfG  ( see:  https://www.actionforgreyhounds.co.uk/meg/ ).
Benson has enjoyed a great life full of adventure and fun with his wonderful family and  is still a big stunning lad now age 9. 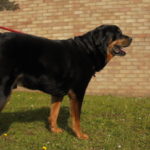 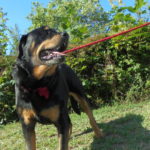