This is an archive of all the previous greyhound news articles from the UK and around the world, updates on demonstrations and requests for assistance with appeals that have featured on the Action for Greyhounds web site. For the latest information in all these areas, please visit our Facebook page and be sure to follow us to be kept right up to date!

Lets hope the GBGB will ensure the long term welfare and security of all the Coventry greyhounds, as they have announced in their statement

Great news, the demise of yet another greyhound track
Let us hope the owners, trainers and the Greyhound Board of Great Britain ensure the long term future welfare and security for all the unwanted greyhounds from this track

Greyhound racing controversy…Florida…Steroid-laced syringes were just ‘lying around’. Investigators didn’t bother to carry out tests on substances found at the kennels.

International lobby group Grey2K has recently released data on the exportation of Australian greyhounds, particularly from New South Wales, showing that hundreds of dogs exported to Macau are facing mistreatment, abuse and even death.

The illegal practice of allowing live animals to be killed by greyhounds as part of their racing training is still occurring in NSW, according to evidence that has been given at a parliamentary inquiry into the state of the industry. 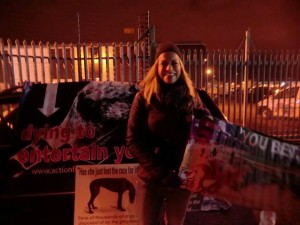 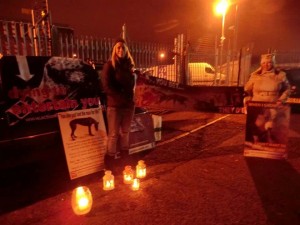 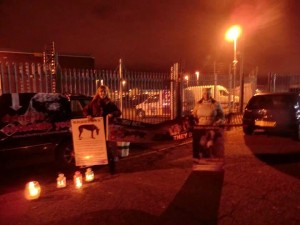 This dedicated group only formed earlier this year and have already held several successful protests outside this track as well as holding other awareness events in and around the area.
Here is what the groups spokesperson had to comment on their evening of education and awareness:

“Good night, considering it was so quiet. Lots of people going for cheap beer but claiming ‘they love the dogs’ so I think we might have managed to change a few minds. An owner offered to show us his kennels!”

It remains to be seen if the ‘owner’ will contact the group to carry out his above invitation.

The group are also raising awareness by sending AFG information to charities and companies who do, or may think of going on a social ‘night at the dogs’.

Anyone who feels they are able to support this group in any way, please contact AFG so we may pass your details on to the group.

They will welcome any positive support to help the group grow in numbers and strength. 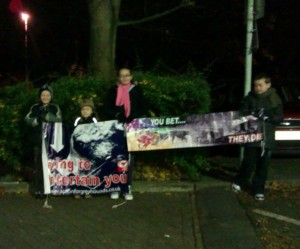 A very dedicated group of greyhound protection campaigners gathered outside Brighton & Hove greyhound stadium to make racegoers aware of the cruelty they were supporting.
This is what the groups spokesperson had to comment on their evenings awareness demonstration:

“As usual, a night at the dogs consists of many different types of groups; birthday parties, stag do’s, pensioners’ night out as well as and the usual betting public. A delightful surprise of the evening was a whole family turning up to support our campaign who traveled more than an hour to express their opposition towards this cruel industry. The children were so well behaved, very eager to hand out leaflets and to my surprise, were well educated, well informed of the cruelty and injustice that goes on in this industry. The youngest boy pointed to a photo on the leaflet and said that dogs shouldn’t be treated like that. The physical presence of our demonstration highlighted the reality of how greyhounds are regarded as by the industry – money making machines and disposable commodities. Nevertheless, some somehow went home with some kind of awareness of the plight of greyhounds.

Some people took time to read our banners; one man from a group said “is that what happens?” to which I quickly acted upon by giving him a leaflet and spoke briefly of the reasons we campaign. He carefully folded the leaflet and placed it in his pocket for him to ‘read later’.

Another surprise of the evening was a security guard kindly handed over to us a couple of leaflets that were thrown on the floor. Such a heart warming act of kindness as he could easily have thrown them in the bin.

Well done to everyone who turned up in the cold especially the children. Some of the supporters tonight were first timers but very keen to join the next protest as they said this is one campaign that we must take a firm stand for, such cruelty to innocent lives musn’t go unnoticed. We gave out a lot of leaflets and spoke to many people who showed interest in our campaign.”