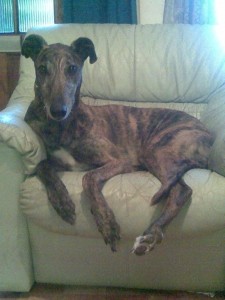 BEX – (named for racing as) Becks In Time

Bex came to the attention of AFG in January 2005, and luckily a foster carer was able to pick him up to take him straight to her home.

In November 2004 Bex was handed over to a young couple stationed at R.A.F. Lakenheath in Suffolk by his racing owner Mr Jubb. He was handed over at the fiveways roundabout, near the airbase, so no home check etc was carried out by Jubb, and no measures taken to secure the future welfare and security of this young 3 year old greyhound with a short racing history – Jubb had informed the new owners that Bex was about 1 year to 18 months old and had never raced.

The couple contacted AFG in January 2005, when they grew tired of him.

It is absolutely not recommended to home any animal on to military bases, whereby people can be transferred to a base anywhere in the world at short notice, usually animals will be left behind. Jubb would obviously not have been bothered by this.

Sadly, on August 31st 2010, after developing an aggressive and incurable form of bone cancer in his shoulder, his devoted carer Jean had to make the unbearable decision to let him go.
He was a wonderful gentle friendly boy who never put a foot wrong and helped settle in many of Jeans fostered hounds. He is very desperately missed by Jean and her other rescued hounds.

Lance came into the care of AFG January 2005. He was no longer wanted by the family who had acquired him free 1 year earlier by the owner/ breeder and trainer.
After a short time in foster care where he was neutered and inoculated, de-flead and wormed. Lance found his forever home March 2005 but was returned to us through no fault of his own after being branded a killer as he held a baby bird in his mouth, which sadly died
Happily back in foster care Lance then found a wonderful home in October 2005, sadly to be returned to us in February 2009 Lance had to be returned to us as a result of a marriage break up.
Luckily for Lance, we had a vacant foster home where lance stayed in permanent foster care never needing to be re-homed, with the company of a beautiful female greyhound “Annie”

Sadly in May 2010, Lance became ill suddenly, he had developed an aggressive tumour between his stomach and spine which had blown up in a matter of hours….Lance could not be treated, and his devoted carers Cathy and Michael had to let him go.
Throughout his time in foster care and homes Lance remained loving and loyal to all his carers and is very sadly missed. 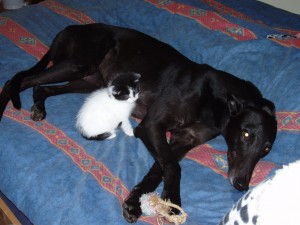