We were made aware of a man who no longer wanted a 13 year old lurcher which had been left to him after both parents (who had Daisy from a puppy) had passed away.

We later found instead of keeping her as a loved family pet, he instead banished her to a run down kennels where she was to spend the previous three of her senior years.
(The establishment.. an illegal puppy farm was to become the subject of a media exposure of animal cruelty in February 2018) http://www.edp24.co.uk/news/crime/rosemary-fabb-roughton-puppy-farm-north-norfolk-district-council-1-5409930

When we collected Daisy, (then named Maisy) from a car park in Cromer, Norfolk, she was in season, unsteady on her hind left leg and had a large amount of flea dirt in her coat. We were told she received the injury as a young pup after trapping her leg in a snare. There were only a small amount of veterinary records for Daisy and it seems the injured leg was left untreated.

After 2 weeks in foster care Daisy became suddenly very ill with a high temperature and was rushed to AfG vets who had to carry out emergency surgery after a diagnosis of Pyometra, a life threatening disease of the womb. There is no evidence that Daisy had been bred from and unusual for the disease to appear during a season. With the fast acting expert care from our vet, Daisy pulled through and made a rapid recovery.

Through no fault of her own in September 2018 her foster home failed and she was moved to her second foster home, which shortly after became her forever home. She continues to be happy and healthy, she wears a bio flow collar which continues to minimize any discomfort in her hind leg. 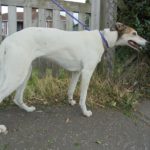 Daisy when she came to AfG 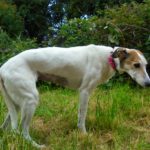 Daisy recovering after her emergency surgery 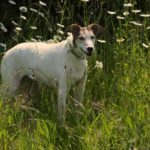 Daisy happy and healthy at age 14 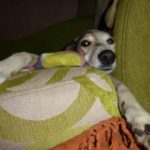