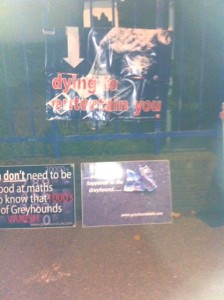 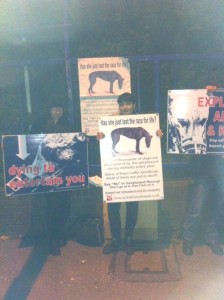 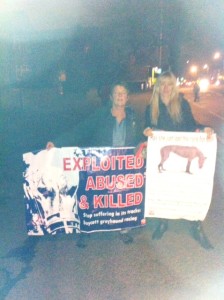 Greyhound protection campaigners organized tonight’s protest to coincide with this racenight being held whilst a massive public firework display was being held right opposite the stadium.

Romford stadium allowed their greyhounds to be exposed to unnecessary trauma by deciding to allow this racenight to go ahead, knowing well in advance that the firework display would be taking place. Even with strong opposition from Greyhound protection campaigners and the Dogs Trust and the Blue Cross, they failed to cancel the racing, putting commercial concerns above animal welfare concerns.

The group say “The protest was very positive, with racegoers willingly taking our leaflets and some even stopping to have discussions with us. Only on man hurled some verbal abuse at us and a female taking a leaflet only to stand and screw it up and throw it to the ground in front of us. We had lots of ‘hoots of support’ from passing motorists”