As you can see by the photograph taken by the dog warden in the stray kennels, she was a very nervous girl.

She had been possibly straying for a while, due to her neglected condition. The dog warden was made aware of Fox as she often returned to a lady’s garden and with much time and patience, the dog warden was able to coax her to come to him. When picked up and weighed at the kennels she was only 16 kilos. When she came to AFG she was 18 kilos.

When Fox came into foster care, it was apparent she had never lived in a house before. She was ravenous for food and was given several small meals throughout the day and over the months that followed the meals were eventually reduced to 2 substantial meals daily, once she had reached her ideal weight of 25 kilos by August 2012.

Slowly over the months which followed, Fox gained confidence, which was helped by her other canine friends in the home.

Fox was adopted in July 2012 where she thoroughly enjoys a happy healthy life of love and fun. 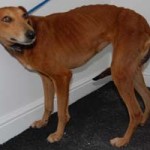 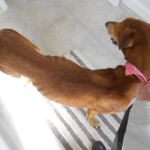 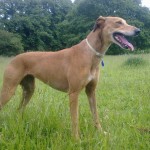 Fox in July 2012 happy and healthy