Not such a large group this evening, as campaigners were also supporting a protest at Henlow Greyhound stadium, but some new supporters including a 10 year old child, who although only a little person, was a big voice for the greyhounds.

The highlight this evening was when a car load of young lads, on viewing the banners on the way in, and also taking a ‘running for their lives’ leaflet, less than 10 minutes later, drove back out and pulled up to inform us that after reading the leaflet, they had decided to support us by not going in.

So because of us being there, we have succeeded in stopping a few more people supporting greyhound racing and hopefully they will go on to spread the word to others.

Another car stopped for a leaflet and asked if we wanted donations, then proceeded to hand us £2.12p….weird….but hey!! that will probably cover the cost of the 100 plus leaflets distributed this evening. 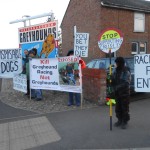 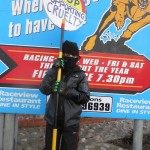