Came into the care of AfG in February 2016 after being left at a boarding kennels with a £20 donation by the ‘owner’.

The kennels contacted several rescues to ensure she had a chance of finding a home.

Although micro chipped at age 2 the owners details had not been updated so no details could be obtained on her background etc. It is not unusual for greyhounds to not have identifying ear tattoos as not all are registered for licensed racing and many are bred on allotment sites or by ‘back street breeders’ and go on to race on unregulated (flapping) tracks and often for the barbaric pastime of illegal hunting and hare coursing.

Grace did not fare well in the noisy kennel environment and although eating she was losing weight. It was evident when Grace arrived she had an extremely high prey drive we believe this was instilled from her being encouraged and rewarded for chasing (possibly killing) wild animals.

So realizing the planned foster home for an 8 year old hound would not be suitable, Grace instead was placed into a more suitable one with the company of 2 other dogs.

The fosterers continued to work on her rehabilitation and even got her used to the family ferrets and chickens but after 9 months they were not able to commit to foster her for much longer so Grace was moved to a second foster home in November 2016, she quickly settled and her physical and mental health continued to improve.

After a short time, her foster home became her forever home where she continues to enjoy a happy life with the company of other rescued hounds including small dogs. 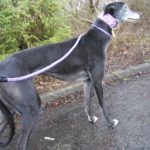 Grace when she arrived to AfG February 2016 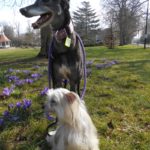 Grace March 2016 more settled and getting used to little dogs 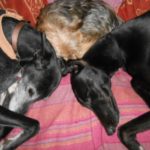