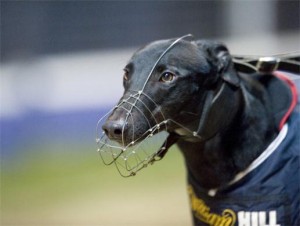 On Tuesday May 15th 2012 a young black male greyhound’s life was tragicly cut short in a trial at Coventry greyhound stadium, before the track officially reopened on Sunday May 20th.
LOCAL DEE JAY (also known as LOCAL FLAWLESS) was born in Ireland on May 25th 2008 along with 3 black sisters (Danesrath Mel, Local Kuro and Local Gaffer). His first race in Ireland was on September 3rd 2009 at Kilkenny greyhound track.

Throughout his brief racing ‘career’ he was dragged from here to Clonmel and Shelbourne Park, then in the U.K from Sittingbounre, Wimbledon, Romford, Brough Park, Belle Vue, Hove & Brighton, Yarmouth, Monmore and Hall Green.

His last race on a licensed track was at Hall Green on 18th April 2012 but he was raced to death at Coventry Stadium in a trial on Tuesday 15th May before the track officially opened on Sunday May 20th.
Trained by the daughter of Coventry greyhound track proprietor Harry Fenton.

Coventry Stadium has been named the ‘stadium of Death’ by local greyhound protection group C.A.G.E. (Coventry Against Greyhound Exploitation) who vow to carry out peaceful protests outside the track until it is forced to close (see article on their first demo).