Hobo was brought to the attention of AFG when a supporter was alerted to his photo on a Norfolk stray pound website. The way the photo had been taken from side on, Hobo (then named bingo) looked like a little whippet type.

We had met a lady who had recently rescued an extremely nervous whippet cross named Fifi who had been taken to a local rescue from a traveller’s site in Ireland and at approx 1 year old had recently given birth to 11 pups. It was decided that when AFG had a suitable confident dog that Fifi would benefit from the company and Fifi’s carers would be happy to foster.

We took Fifi and her carer Jane to the stray kennels to meet Bingo and was surprised when he was brought into the paddock to meet us all. His body was so thin and his head (front on) was huge, he was just so out of proportion. The 2 hounds got on straight away and Fifi was quickly flirting and bossing him about. We weren’t expecting to meet what seemed to be a Staffy cross collie type, but were reluctant to leave him at the kennel as he seemed to be a little ‘stir crazy’, he had been there for 3 weeks and hadn’t been allowed out, as he was not inoculated so wasn’t allowed into the paddocks where the other dogs were exercised.

Bingo’s name was changed to Hobo and he was inoculated, chipped, treated for parasites and a short while later, was neutered. We were right, he was a great pal for Fifi, who quickly started coming out of her shell with the company of happy, friendly Hobo. After a few weeks, Hobo’s carers, Jane and Gary became so attached to him, they felt they would be unable to give him up for adoption, so they decided to adopt him.

Hobo and Fifi are great pals and seeing Fifi now, it’s hard to imagine how frightened she was when we first met her and Hobo is now all in proportion and both are happy healthy hounds with a fantastic home and a great life, full of fun. 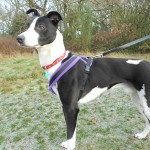 Hobo when he came to AFG 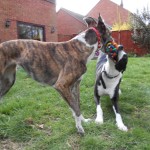 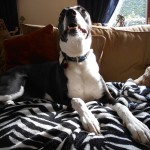 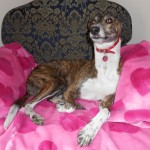