In Memory of Rusty

On Sunday May 2nd 2004, a young black male greyhound (later found to be called Rusty*) was discovered by a dog walker, who heard him whimpering in agony in a rubbish tip on Fochriw mountain, in the Rhymney Valley, South Wales.

Rusty had been injured in several ways, including being shot in the head with a captive-bolt pistol and his ears had been hacked off, because they contained tattoos that could identify him.

Despite this appalling torture, Rusty was still alive and wagging his tail, but his injuries were so extensive, that he was later put to sleep by a vet.

Toward the end of that year, at Caerphilly Magistrates court, greyhound ‘executioner’ Andrew Gough, was sentenced to 6 months imprisonment for torturing Rusty and banned from keeping animals for life.

It emerged in Gough’s trial that both Rusty’s owner and trainer had handed him over to Gough with £10 to kill him after a toe injury had ended this greyhounds racing career.

On the nearest weekend to May 2nd each year, to mark the anniversary of Rusty’s suffering and death, ‘Remembering Rusty’ events are held, in memory of Rusty and the thousands of greyhounds who have suffered and died at the hands of the greyhound racing industry. 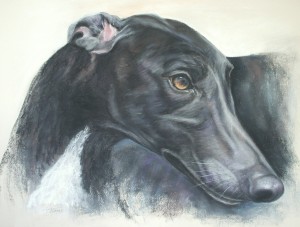 This portrait ‘REMEMBER RUSTY’ was kindly created and donated to Action for Greyhounds by the artist Thomasz Adamski in 2009.

After reading Rusty’s tragic story, Thomas was inspired to create this portrait as his impression of how Rusty would have looked (at age approx 9 years) if he had not been used and abused by the greyhound racing industry, and tortured and mutilated in such an horrific way.

SADLY, RUSTY IS JUST ONE VICTIM OF THE GREYHOUND RACING INDUSTRY FUELED BY PROFIT AND GREED WHERE 1,000’S OF GREYHOUNDS ARE USED AS DISPOSABLE COMMODITIES