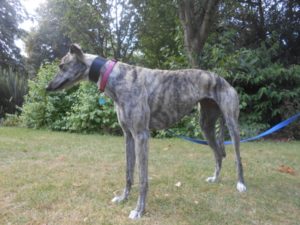 Came into the care of AfG in June 2016 (with her litter brother Vincent) at age just 26 months.

AfG had Kiz’s official ID Card but no races were listed and no racing history was available from the Irish Coursing Club, so we assume any racing history would have been on an unregulated
track in Ireland.

Both had been saved from a ‘high kill rate’ pound in Ennis, County Clare, where they had been left by their owner/trainer saying “She was a good bitch, she raced, he was no good he is too slow”. Both were saved by Clare Greyhound Project and Rover Rescue in Ireland and arrangements were made for them to come to AfG together, where we had separate foster homes waiting for them.

Kiz got her name as she was so lovable and friendly and just wanted to kiss everyone she met, both canine and human. Kiz quickly settled into a family home.

After a few weeks in foster care with the company of other hounds, Kiz gained confidence and condition. She found her wonderful forever home August 1st 2016 after a lovely couple met and fell for her at one of AfG’s awareness events in Norwich.

The couple had already rescued greyhounds over many years. She quickly settled into her new home, where she enjoys her life of fun and adventure. Totally adored by her 2 carers and everyone who meets her. 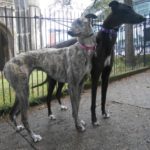 Kiz (with brother Vincent) the day they came to AfG 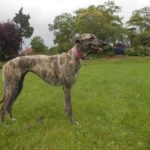 Kiz having fun the day after she came to AfG. 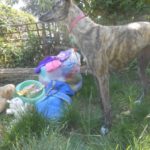 Kiz with her belongings, off to her new home.