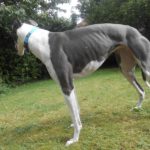 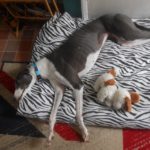 Came to the care of AfG September 2016 after we had been alerted she was being offered on an internet site.

As we were lucky enough to have a temporary foster home available, we managed to take her into our care to ensure her welfare and safety, as she could have quite easily fallen into the wrong hands and her future could have been uncertain, especially with her not being neutered which would have made her attractive for breeding.

The person who had her, told us she been given to a relative by the trainer and then passed on to this person who was also related to the trainer, but who was unable to keep her.
We were told she had broken her hock on the first bend in her last race.

When we checked her racing history we discovered she had 2 races at Mildenhall track 12th and 19th June 2015 finishing 1st on the last race. We were given information of a vets where Laceys medical records were on our change of ownership form, but when we checked there were no records at the vets at all. We were later informed by neighbors that poor Lacey was left shut in the house for long periods and was clearly distressed and barking a lot, they had also witnessed her escaping and running loose, so being at risk near a main road and surrounding fields. So it is no surprise that when Lacey went to her first foster home, she was unsettled for a while. She soon got used to a regular routine and became more contented.

She was underweight when she arrived and had hair loss on her chest and thighs. After a short settling in period where she gained some weight, she was neutered and received other necessary veterinary care. Our vets x rays of her broken hock revealed the hock had been pinned but seemed a bad fracture with fragments from the break re calcifying to the hock bone, which was why the outside of her hock had a ‘lumpy’ appearance. So we expect because she carried on running after the hock broke it caused a more severe fracture. She was, of course never to race again.

After her recoup/recovery period in temporary foster care, Lacey was moved to a more permanent foster home, this time with the company of other hounds, which furthered her socialization and settling.

Sometime later, Lacey found her forever home where she enjoys family life with the company of her other canine pals. 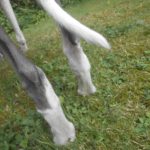 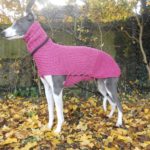 Lacey a few weeks after rescue 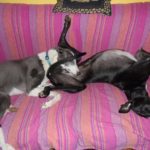 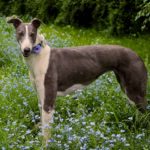