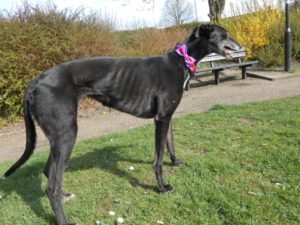 Came into the care of AfG end of March 2017 at age 9 years, after being earlier found as an unclaimed stray.

She had been found in a bad state of neglect, underweight at only 20 kg, her nails were so overgrown her pads did not touch the ground, she was heavily infested with internal and external parasites and her teeth were in a bad state with some rotten and several loose. Poor girl must have been suffering such pain and been so uncomfortable.

After her nails were cut back as much as possible, and she received treatment for the parasite infestation she had a much deserved bath a few good meals of nourishing food and a good clean soft bed to lie on, so started feeling more comfortable.

Some weeks later she arrived into the care of AfG where her condition had improved but she still had some way to go.

After settling in to her foster home with the company of another rescued female greyhound, Lily continued to improve mentally and physically and after a short settling in period and a course of antibiotics, our vet deemed her in a suitable enough state of health to be neutered and have her dental treatment. She had a dental clean and descale and 7 teeth were extracted, afterwards, Lily must have felt much more comfortable and her appetite continued to improve greatly and she continued to gain weight and general condition.

After a few more weeks in foster care, Lily found her amazing forever home with a loving family who had not had a rescued greyhound before so Lily was so well matched to the family and their home being a mature, though now very much more active girl and with such a kind, gentle nature, she is now carrying on enjoying her well deserved life of love, comfort and respect as a cherished family member.

Strangely, after being used for racing at Wimbledon with a total of 125 races from June 2010 to February 2013 she was found not long after Wimbledon greyhound track held it’s last race meeting and closed down in early 2017. 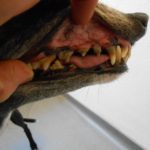 Lilys teeth before her vet treatment. 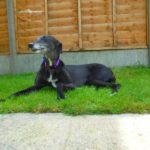