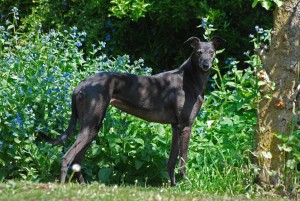 Peg never made the grade to race and in 2003 was off-loaded by trainer Irene Barnard with little regard shown for the dog’s future welfare and security. Turn the clock forward to June 2009 and the greyhound was being advertised on Freecycle. A reader, apparently concerned about what might happen to the dog, took possession of her and a few days later signed the black female over to AFG.

After 3 years in what was expected to be Peg’s ‘forever home’ she had to come back into the care of AFGg through no fault of her own and is now in permanent foster care with her soul mate Frankie, another rescued greyhound. Frankie came from another rescue center and Peg has helped him gain confidence since she joined him in his home.