BEDFORDSHIRE GREYHOUND ACTION (BGA ) PEACEFUL PROTEST HENLOW TRACK 03.05.2014
The group hold regular protests outside this track and when they are not here, they join Greyhound Action in Peterbourough (GAIP ) with protests outside the Fengate track.

The group are gaining new supporters all the time and although sometimes small in numbers, manage to always raise vital awareness and often get good feedback from some racegoers, telling them they will not be coming back. 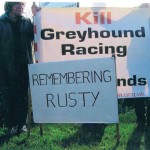 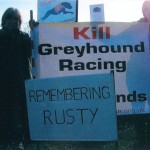 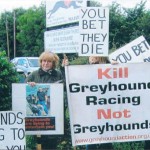 After the group had already spent a long day of awareness with their Remember Rusty Memorial walk in Lewes, they still found time to gather outside their local Brighton & Hove greyhound track, which is owned by Coral bookmakers.

The group soon realized the reason why the stadium was more well attended than usual, it was because Groupon were issuing ‘cheap night out’ tickets.

But on a more positive note, the group felt their event was a success, as not only did they find that many of the racegoers were ‘first timers’ and some on a work night out, who didn’t really want to be there, also many showed concern when reading the leaflets and banners.

Also the stadium shares it’s car park with the supermarket next door, so a good opportunity to distribute leaflets to the shoppers too. 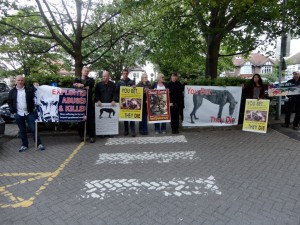 Who would have thought that this long standing greyhound protection group would have to be protesting outside the Coventry track so soon after its recent closure as a licensed track. The group are now planning to hold peaceful awareness protests once again as this track has re-opened as a ‘flapping’ track.

Here is what the groups spokesperson has to say about the first race meeting :

71 cars went in, and only about half a dozen were ordinary ‘punters’- all the rest were ‘flapping men’ with hounds on the back seats of the cars, with no safety harnesses or crates.

The track had published an ‘advanced card’with supposedly 11 races to be run. 5 of these races only had 5 runners down, and if the greyhounds we saw going in were only half of the total, that turned up to run, the ‘card’ must have been cut for lack of runners.

Will be interesting to see how many races were actually run- (unless, of course, they run some of the dogs twice, in different races) ! 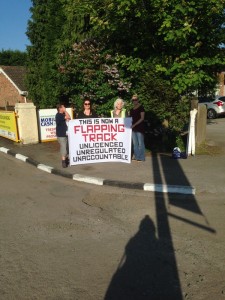