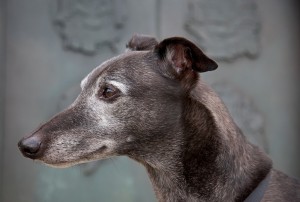 Bobby was named for racing as Megans Mustang but was never issued with an I.D. card, meaning he did not get to race on a licensed track. So he was given away as free by the owner/trainer/breeder.

Bobby was given to a young lady with a small child who was intending to pick up a young fawn female advertised but was soon persuaded by Barnard to take the male, as Barnard stated she could home the pretty small greyhound easily.

Bobby had many problems when offloaded to the lady including being very underweight and suffering with mange. The young lady transformed this neglected boy over the next 6 months into a healthy hound, but due to a change in her circumstances whereby she was having to leave him for long hours and fearing the stress and separation anxiety he started to suffer with would allow his health to deteriorate, she sought the help of AFG.

Luckily, Bobby was able to go straight into a foster home, whereby this adorable boy instantly won the heart of his carer who adopted him into his forever home. Since then with devoted care he has lived a contented happy life.