Came into the care of AfG July 2018.
He was lame on front legs and he had a deeply embedded untreated corn on a front toe.
His last recorded race 2 months previous, stated he finished behind the rest and ‘Bumped 1’ ( obviously meaning collided with another competing Greyhound) so likely the cause of his lameness.
He was not neutered, had no veterinary records and his inoculations were not up to date.
His overall body condition was not  good, he had bald patches on his chest, behind his ears and over his thighs, had tartar on most teeth, he  had dry skin full of scurf with a lack luster coat.
He was a very timid young hound and particularly frightened of men and children.
Luckily Mervin was able to go straight into a very knowledgeable foster home with the company of other rescued Sighthounds which helped him greatly to gain confidence, over weeks and months which followed Mervin has gradually improved physically and mentally though not as bad as he was, he is still wary of certain men especially should they come up behind him.
Although Mervin had been trained and used for racing as well as sharing his home with other hounds and children, he also gets along well with several resident rescued Guinea Pigs.
His amazing foster family became so attached to beautiful Mervin it was not long before his foster home became his forever home where we hope he can enjoy many happy years ahead full of love, fun and adventure. 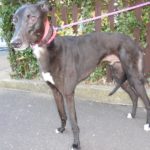 Mervin when he came to AfG bewildered and timid 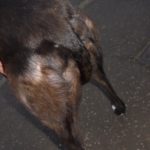 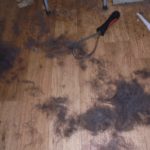 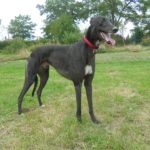 After 1 month of proper care 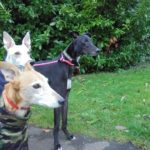 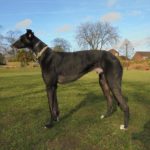