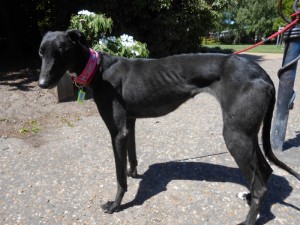 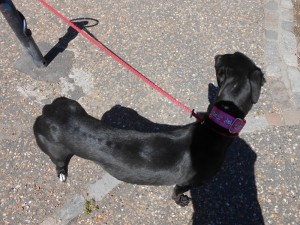 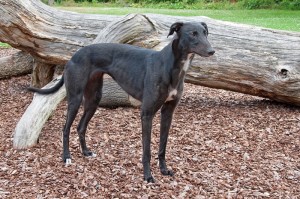 Last rec. race: As above

Mini came into the care of AFG June 3rd 2013 as an unclaimed stray at just 2 years old.

She was bewildered, underweight and generally in poor condition for such a young hound and had also not fared well in the stray kennels. Her racing history showed a failed trial at Brighton & Hove stadium. It seems she was then passed around, until she was picked up as a stray in Norfolk in May 2013.

Mini was able to go straight into a foster home with a little Jack Russell for company, which helped her settle in quickly. The pair became best friends and Mini’s health and well being improved rapidly. After the initial settling in period, Mini was spayed.

She is now a happy, lively, cheeky girl who is full of fun, as a young hound should be. Mini was adopted by her foster mum in July and will now have a bright future ahead of her.