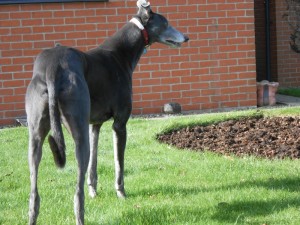 Beau when he came to AFG 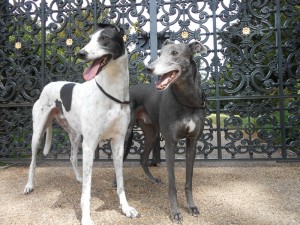 Beau came into the care of AFG in February 2013 from his previous carer of 4 years, whose change of circumstances meant she was unable to keep Beau and give him the care he was used to. Unlike many people happy to offload their pets without any care for their future welfare and safety, Beau’s was her priority.

He was not neutered but was in great physical condition and was very friendly.

As we had no foster home available straight away, Beau was placed into private boarding, where he was adored and thoroughly spoiled by staff. Here we realized he was sociable with all other breeds too.

A lovely couple who had adopted Lurcher Joey from AFG several years ago, had sadly lost him at the end of 2012 at the grand age of 13. They had another rescued greyhound, Yeats. Once Beau and Yeats met and got on very well, Beau joined him in his home to be fostered.

He was neutered and had a dental and once it became apparent that the pair were inseparable and his carers couldn’t bear to part with him either, Beau’s foster home became his forever home, where he enjoys his great life with Yeats.