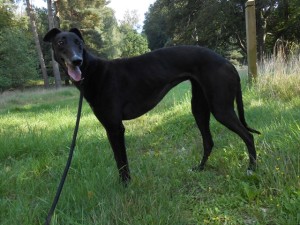 She was earlier found wandering as a stray and eating from rubbish bins in County Clare and was in very bad condition. Luckily, once the couple who found her discovered what her fate would be had they handed her into the local Ennis stray pound, they contacted Clare Greyhound Project (CGP).

As CGP had no available foster carers or available kennel placements at that time, the couple agreed to foster Dove until CGP were able to take her into their care. With the care of the kind couple and later CGP, Doves health and well being steadily improved.

AfG had a foster home for Dove and she was later brought over to Norfolk from Ireland. She quickly settled in to her foster home where she was steadily rehabilitated and socialised and enjoying her new life to the full with dedicated care.

Doves 1st adoption failed, through no fault of her own and after returning to one of AfGs foster homes, Dove found her perfect home in December 2016, where she shares her home with the company of a tiny cross breed hound, where Dove enjoys her life to the full.

When Doves history was traced it was discovered the previous owner had sold or given her away to be used for breeding. Luckily Dove escaped and was lucky enough to be found by kind caring people who wanted to ensure he long term welfare and safety. After her last race, no transfer of ownership paperwork could be found. So Doves fate could have been so much different and she could have so easily ‘gone off the radar’ as many thousands of greyhounds do, who simply disappear and remain unaccounted for. 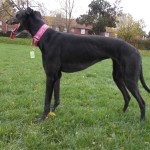