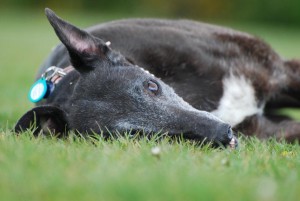 BELLE – (named for racing as) No Way Jose

Greyhounds homed independently by members of the racing fraternity are rarely (if ever) neutered. No Way Jose was no exception and across many years was allowed to have several litters. Home for the greyhound was a dilapidated caravan and when responsibility for the animals care was left with a neighbour the help of AFG was sought.

After a short period of time in foster care Belle was found a loving and forever home in June 2010. 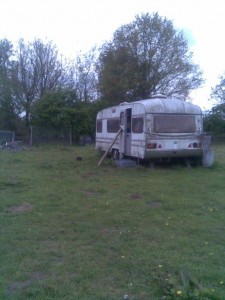 This is the dilapidated caravan on a field where Belle spent most of her life and gave birth to several litters of pups. There was no heating and no adequate bedding and the dirt and stench was horrendous. 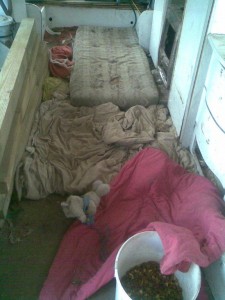 The inside of the caravan from where we picked her up when she was aged 9 and later we were to return to pick up her 2 sons 3 year old lurchers Storm and Floyd.
Whilst the owner was detained in a mental institution a neighbor filled buckets daily for the dogs with food and water. There was evidence that the dogs were regularly catching rabbits to eat.