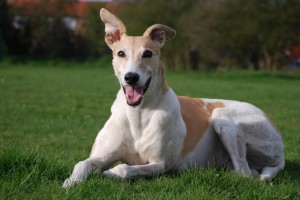 Zonda was off-loaded on a young couple who had their hands full with 3 children. The home was to prove totally unsuitable but the greyhound was then given to a teenager whose tenancy agreement prevented her from owning another dog. The dog’s future was only secure when the teenager’s father contacted AFG.

After a few months in foster care Zonda was found a loving and forever home.