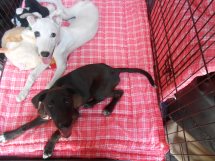 Patch with poppy arriving to UK

Patch came into the care of AfG in September 2016 believed to be approx 4 months of age (along with lurcher puppy Poppy: see Dogs Homed – Other Sighthounds).

He was found abandoned in Ireland in a state of neglect and estimated to be about 8 weeks of age and went into the care of Clare Greyhound Project (CGP) in Ireland. As he was only a puppy and not ear tattooed there was no previous history found for him.

Luckily AfG were able to take both pups into our care as we had a fantastic foster home available for them.

Patch soon gained condition physically and mentally and was very well socialized with the company of children, dogs of various breeds, cats and chickens. This of course helped him greatly when he eventually found his forever home over Easter 2017. He quickly settled in with his new family and canine housemates, Diesel the Labrador and Prince the little Japanese Chin cross.

So he is a lucky greyhound who although had a bad start in life for a short time, he managed to escape the greyhound racing industry. 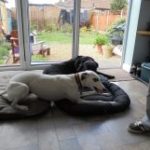 Patch settling in to his forever home. 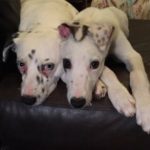 Patch with one of his canine housemates Bluey 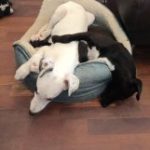 Patch and Poppy snoozing in foster home after a busy day 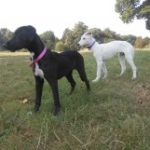 Patch and Poppy at the park before going to foster home 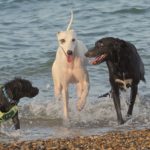 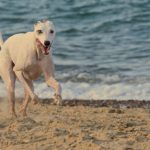