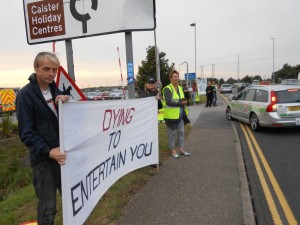 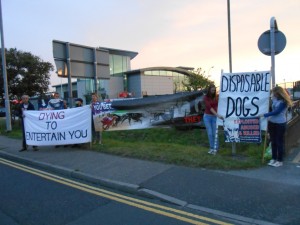 What a great start to the new month with new supporters joining the protest this evening.

Didn’t seem very well attended by punters, including only 2 half empty coaches going in.

Very encouraging as we are at the height of the holiday season to see that holiday makers are not being enticed into supporting greyhound racing even with the cheap deals on.

With a glorious day of bright sunny weather, this helped punters and passing motorists get a really good view of our large informative banners.

Many punters wound down their car windows and took leaflets as they made their way into the stadium. so hopefully once they read them, many will chose not to return.

Once again we had many ‘hoot ‘ of support from passing motorists, who were thankfully going elsewhere for their nights entertainment. Still concerning to see that parents are shamefully taking their young children into the stadium to introduce them to gambling and animal exploitation.

A lady with 2 young children going in on foot were offered a leaflet, the adult declined and the 2 children each took a leaflet with the male child saying he disagreed with greyhound racing, much to the adults embarrassment, so the poor child didnt have a choice….wonder how the adult will explain that one away to the child !!!