She had been rescued in Ireland during a raid on a house and was believed to be about 8 weeks of age.

AfG were told about the pups once CGP considered them ready to be homed. Luckily AfG had a suitable foster home for Poppy (and Patch) so arrangements were made for them to come into our care.
Both were about 4 months of age when they came to AfG, although we believe Poppy could have been slightly older as she seemed more mature. Of course they were full of mischief and needed experienced, dedicated care.

Poppy was very well socialized in her foster home with the company of children, dogs of various breeds, cats and chickens (and of course her naughty accomplice Patch). So this was very beneficial for her once she found her forever home by the seaside with canine housemate 14 year old Border Collie Rosie, whos gentle nature had a calming influence on cheeky Poppy.

The day after Poppy was homed she came into season, so 3 months later she came to AfG vet to be neutered and after a short time on the lead (which frustrated her greatly) she was able to continue with her fun and frolics and running on the beach with all the various hounds she had made friends with.

Later in 2017 she was greatly amused when meeting another family member….the tortoise who had just come out of hibernation. 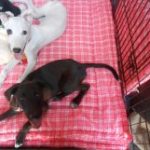 Poppy and Patch when they arrived to AfG 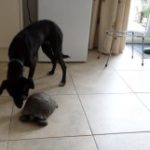 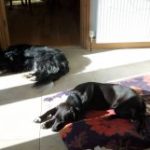 Poppy and Rosie at home 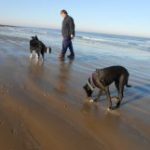 Poppy on the beach with Rosie in her new home 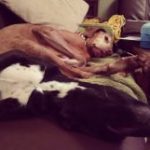 Poppy cozyed up with housemate Floyd 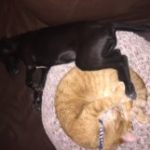 Poppy snuggled with one of the cats 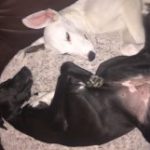 Poppy snoozing with Patch after a busy day 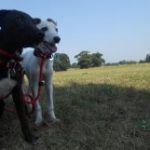 Poppy with Patch at park ready to go to foster home 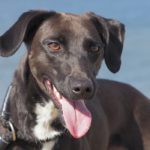 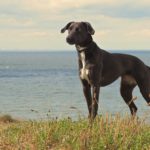