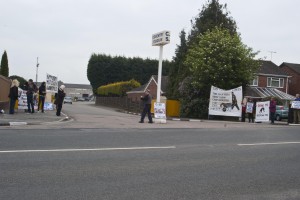 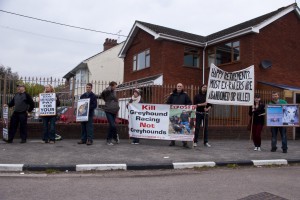 20 supporters of local Greyhound protection group C.A.G.E. held a peaceful protest here to coincide with the re-opening of the track. Dubbed ‘The Stadium of Death’ after a young male greyhound named Local Dee Jay trained by the daughter of track proprietor Harry Findlay was raced to death here on Tuesday May 15th in a trial before the track officially opened (see news article).
The track reopened today after being closed in 2009 after the previous company who ran it, went out of business.

The spokesperson and group coordinator Ann, had this to say:
“We will be protesting every week until it closes again, the attendances were low this evening so we are optimistic the track will not be supported by general members of the public who would not knowingly wish to support greyhound exploitation, cruelty and suffering and apart from the obvious hardened race goers, trainers and owners we were encouraged by the amount of concerned punters who willingly accepted the leaflets we were distributing and would hope they will not visit the track again, we are optimistic that with our regular awareness events here we will successfully manage to once again make sure this track closes as soon as possible due to lack of support, as we have managed to do on two previous occasions”