Dog’s Name: Sky
Estimated age: 10 years
Breed: possibly Whippet cross Staffy
Date came to Afg’s care: 05.08.2007
How dog was acquired by Afg: owner gave up 5 dogs to a local rescue and Sky was signed over by them to Afg

An owner gave up 5 of her dogs all at once to a local rescue, one being Sky, another her sister, another 8 year old lurcher boy and 2 little brother and sister terriers of age 11 years.

All the dogs were traumatized in the kennel environment, as they could not cope with being separated from each other so it was decided by the kennel manager that it would benefit the dogs to all go to foster homes, the 2 terriers were homed together, the lurcher went to a home with other dogs, Sky’s sister was homed with 2 other dogs and Sky came to Annie and Peter.

It was obvious immediately that Sky’s somewhat rotund shape was very abnormal coupled with the fact that she could only eat and drink very small amounts at a time and passed very little when she went to the toilet.

She was soon taken to AFG vets and once they obtained her previous veterinary records, it appeared that the last vet had just advised to lower her food intake as she was overweight (no bloods or x-rays were taken). AFG’s vet thought she may be suffering from Cushings syndrome and was opting to do blood tests, but then decided to be on the safe side, to admit Sky for x-rays and blood tests.

The following day we were informed that Sky was suffering with a haemangiosarcoma, a tumor caused by a cancer of the blood cells, the tumor was huge and attached to her spleen and there was a possibility it may not be able to be successfully removed, but if left, she would die, as it was so near the risk of bursting. The op went ahead and little Sky made a full recovery.

She went to the vets weighing 18 kg and when brought home the next day she weighed only 14 kg which was her ideal weight for her size. The photo the vet nurse took when the tumor was removed, weighing 4kg was the same weight and size of a normal new born baby!! This little girl was amazing.

The vet explained that due to the nature of this cancer and Sky’s age, she couldn’t rule out the possibility of the cancer returning somewhere else and that this should be explained to any new carer once Sky was adopted. Bearing all this in mind and the fact that Sky was so happily settled in Annie and Peters home, they decided to adopt her.

Sadly just 2 months later, Sky passed away within moments, whilst asleep on the sofa at 10pm lying beside Annie, with what the vet believes was a brain hemorrhage, possibly associated with the cancer. She did not suffer. Annie and Peter felt very privileged to share their lives with Sky ‘The Wonder Dog’ and only wish she could have been with them much longer, she is still greatly missed. 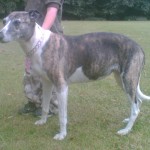 Sky the day before her op 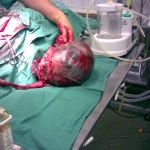