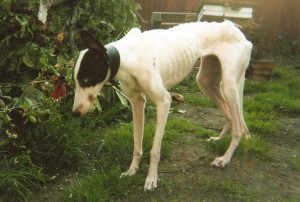 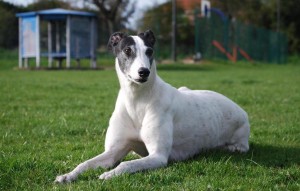 At the end of Gemma’s brief racing career she was given away without any regard shown for her future welfare. The new owner soon tired of the greyhound and passed her on with similar disregard. Over the following 8 months Gemma suffered appalling treatment at the hands of Claire Colby who was later banned from owning dogs for 5 years. When rescued the beautiful white and black female was emaciated, infested with fleas and suffering numerous pressure sores.

After making a full recovery Gem was found a loving and forever home.