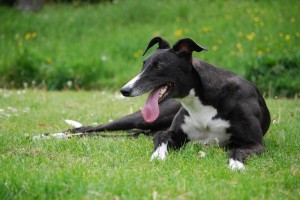 Zulu was given away just 2 days after her career on the track was terminated due to injury. Trainer Ian Brown was likely elated when the prospective owner, Angela Laver, agreed also to adopt Burgoyne Bunny who had retired through injury 4 days previously. Unable to cope, Laver off-loaded both greyhounds within a couple of weeks of signing the adoption forms. Burgoyne Bunny was later found abandoned in a flat and Zulu spent just 3 months in her next ‘forever’ home.

After a short period of time in foster care Zulu was found a loving and forever home.