Came to the care of AfG (with his litter sister Kiz) at age just 26 months in June 2016. Both greyhounds had been saved from a ‘high kill rate’ pound in Ennis, County Clare, Ireland.
They were left there by their trainer/owner stating “He was no good .. he is too slow”” and of his sister ” She was a good bitch, she raced”.

Both were saved by Clare Greyhound Project (CGP) an Rover Rescue in Ireland and later arrangements were made for them to come to AfG together where we had separate foster homes waiting for them.

Vinnie soon settled into his experienced foster home with the company of two other rescued hounds, a young lurcher and a senior setter.

After examination at our vets the report states Vinnie’s broken protruding rib and broken base of his tail were unlikely to be birth defects but more likely caused by trauma injury.
Vinnie was not well socialised and soon had to learn that small dogs, cats and other small furries were not for him to hunt.

Over months which followed with the patience and expertise of his foster carers, Vinnie’s physical and mental health gradually improved and they had become so attached to him, they finally decided to adopt him.

Vinnie is now very much more settled and has even gained a lot of little canine friends, once he realised they were dogs too.

Over the months the white flecks appearing on Vinnie’s shiny black coat, multiplied covering most of his body, so he is now fondly known as Vinnie, the blizzard hound. 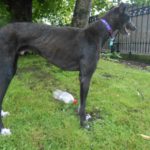 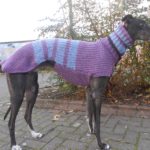 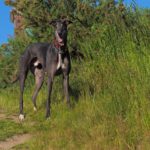