WAS THERE ANY JUSTICE FOR KERRIE? 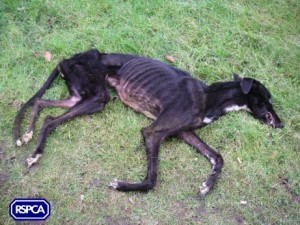 Action for Greyhounds have been informed by the R.S.P.C.A. that despite the best efforts from themselves and the police, Kerrie’s killer(s) were never found and brought to justice, due to lack of evidence. Therefore, the person(s) responsible for abusing and starving Kerrie to death are at liberty to do the same to other animals.

New legislation was introduced by D.E.F.R.A. on April 6th 2010, on the back of the ‘Animal Welfare Act ‘ of 2006, whereby all racing greyhounds, as well as being ear tattoed, are to be microchipped. This raises a question mark over the effectiveness of this new legislation.

Newtown Kerrie a black female greyhound, aged only five years, raced at Yarmouth from 4th September 2008 to 29th September 2010 a total of 46 races (including 10 trials).

She was homed by the Retired Greyhound Trust (R.G.T.) in November 2010 and just 15 months later, was found starved to death and dumped in a household wheelie bin on Arlington Way in Thetford, Norfolk.

Did Kerrie’s killer watch her daily, slowly starve to death? or was she left alone to suffer, waiting for someone to come to her aid and show her affection and offer her good food and a drink of water and take her for a nice walk?

It has not been proven who Kerrie’s last owner(s) were.

This raises the question, can microchipping work? or can it only work for responsible people who really care about the welfare and safety of their animals? Currently, there are serious loop-holes in the microchipping system.

We believe that the last registered owner on the microchip data base should be the person held responsible for the well-being of the animal and if the animal is found to be suffering from ill treatment, or in the worst case (of poor little Kerrie) dead, then the last registered owner should be held accountable and brought to justice and be prosecuted

COMPARE LITTLE KERRIES STORY TO THAT OF GREYHOUND BUBBLY TOTTIE
Once a champion racing greyhound who won the St Leger race at Wimbledon greyhound stadium and who once changed hands for £50,000.

Unlike Newtown Kerrie, Bubbly Tottie’s story gained national and international media coverage and the previous owners were taken to court and prosecuted and received a ban from keeping animals.
Luckily, Bubbly Tottie and the other greyhound the couple abused (Pebbles) were saved in the nick of time, before they starved to death and both made a full recovery and were found responsible homes, unlike poor little Kerrie.