We were informed about Zim by another rescue who couldn’t take him. Once a foster home was found, Afg were able to take him.

The previous owners acquired him 6 months earlier as an emaciated, mange ridden pup, estimated to be about 6 months old. They reared him to good health, but when they realized how large he was and how lively and demanding he was. being pensioners, they realized he would need more care than they could give him.

Unfortunately this lad was not properly socialised or trained at the crucial stage of his life. This is partly why his first foster home failed very quickly.

In his second foster home, Zim proved a real challenge, but with time and patience, he slowly improved. After 1 year in foster care, a perfect home was found for Zim, with a very active retired gentleman, who had all the time in the world to devote to him where he was thoroughly spoiled, had his own 1 acre garden and got lots of great long walks out.

Very sadly 15 months later ,through no fault of his own, Zim had to be returned to Afg when his carer developed an unexpected health problem. All Afg foster homes were full at the time, but after 2 weeks in private boarding, where Zim thoroughly enjoyed his time, racing around the paddocks with lots of other dogs, another fantastic home was found for him – this time with two gorgeous rescued girls, Star a young border collie, Springer, Whippet cross and Maggie a beautiful mature saluki, Greyhound cross. Of course again Zim is now in his element, but with the two girls keeping him in check Zim has developed into a great character in his time with Afg and is so happy go lucky and just seems to take on everything as one big, great adventure. 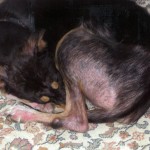 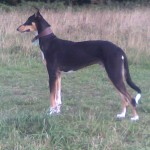 Zim shortly after he came to Afg 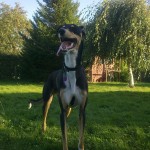 Zim September 2011 in his new home